How harassed are you?

Another survey hits the press, this time from the Trades Union Congress and Everyday Sexism, telling us how badly women are treated at work.

Scepticism is the obvious response, because the TUC is in the business of protecting workers and is never going to put its name to a survey saying they don't need it. Everyday Sexism isn't in the business of denying there's a problem either, and has form when it comes to presenting anecdote as data. But we could make similar arguments about most surveys that appear in the press.

We all know sexism used to be a big problem in the workplace, and most of us suspect that it hasn't been eradicated. After reading this survey, our understanding hasn't moved on an inch.


A lot of commenters in the Guardian questioned the data. Here's the link the Guardian was too shy to publish: Still just a bit of banter? Sexual harassment in the workplace in 2016.

Here are the headline findings:


Immediately, we have to qualify this with 52% of those who responded. The survey isn't clear about its methodology: "From an overall sample of 3,524 GB adults, 1,533 GB Adult Women were happy to be asked about workplace harassment." Did the original sample include men? If so, then one would imagine the sample was about 50:50, which would imply a response rate from women of 87%, which is extraordinarily high. But why would such a survey be sent to men since it isn't interested in their experiences (and I'm not saying it should be).

More likely then, the original sample was just women and that over half of them didn't bother to do the survey. Usually you can add these non-responders to the "no experience of this issue" figure, effectively reducing the reported incidence by more than half. But with such a topic, there must also be those who have experienced it and don't want to talk about it, even in a tick-box online survey. So even presumptions that are normally reliable can't be relied on in this case.

The survey doesn't help by calling itself "Sexual Harassment in the Workplace in 2016", since the data includes incidents more than a year ago: 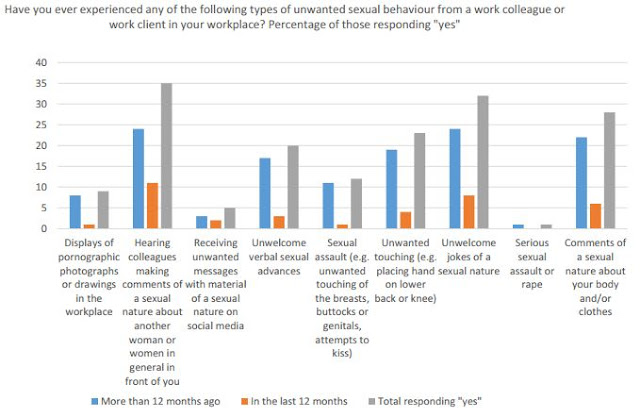 The vast majority of incidents are older than 12 months old, contradicting the whole thrust of the survey.

Worst of all, it conflates everything from rape to overhearing a man tell another man that he likes women's bums.

So, what does this survey actually tell us? Some women have experienced behaviour at work ranging from smutty comments to rape. There's no way of knowing anything more concrete than that. It doesn't mean it's not a problem, but we haven't learnt anything new about the scale of the problem.

In case anyone is interested, here's my experience (the two responses cover the two options in the survey: more than 12 months ago and in the last 12 months):

Of course women's experience of these things are often more negative than men's, but conflating the minor with the major does the cause no good at all. As the Guardian's comment section showed, most people can see through such statistical massaging and it provokes hostility rather than support.

Moral: If you're dishonest making your case, people won't believe you even if you're right.

Most read this week

If you find this blog thoroughly irritating, these blogs might annoy you too